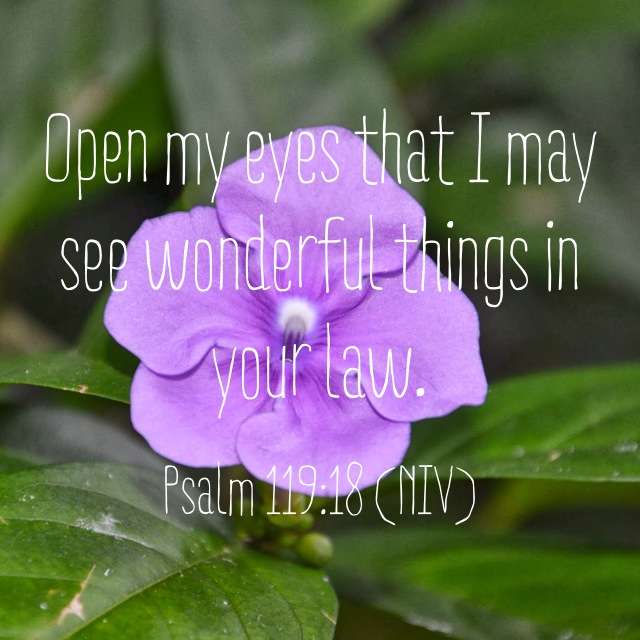 Last Sunday, in our ladies Sunday School class just as we were in the middle of praying my eyes popped wide open and just as  they did our leader prayed, “Lord, open our eyes…to your word.  Help us to see.”

The lesson was on Goliath – the story we all heard as children about the little boy named David, who put one little stone into the sling and the sling went round and round.  You can find the story in 1 Samuel 17 – and what struck me was verse 16 “For forty days the Philistine came forward every morning and evening and took his stand.”   Back in verse 11 we read they were terrified and dismayed by Goliath.  Yet, he came and took his stand every morning and night for 40 days.

It made me wonder if this terror in their life became as much of  a reality as the sunrise and the sunset.  He’s here again, and he’s taunting us and we are hopeless.   This was their prison, their hopeless cell.  Their chains.  Unable to defeat and conquer this giant in their life.  This giant Goliath – kept showing up over and over.  They could depend on the terror.  The terror and dismay continued until it became their normal.
Until little David shows up and in verse 26 he asks, “What will be done for the man who kills this Philistine and removes this disgrace from Israel? Who is this uncircumcised Philistine that he should defy the armies of the living God?”  He sees Goliath as a disgrace, and he wants to take him down.
One little boy named David had seen the Lord work in His life.
One little boy knew His God was powerful and would protect him.
One little boy knew disgrace when he saw it.
Those in the camp who were terrified – did they encourage him and thank him?  No!  His own brother doubted his ability and his motives – even going so far to call him wicked and conceited.  When David assured Saul that the same God who rescued him from the paw of the lion and the bear would rescue him from the Philistine – Saul said, “Go, and the Lord be with you.” (vs 37)
As David approached Goliath, he said, “I come against you in the name of the Lord Almighty, whom you have defied.   This day the Lord will deliver you into my hands…the whole world will know there is a God in Israel…for the battle is the Lord’s.”
These men, who for forty days had been waiting in fear for Goliath to show up day and night witnessed God protect a little boy who had the faith to face this giant with a stone.  I wonder what that did for them when they found themselves facing another giant?  I wonder if it caused them to lean completely on God and face their own personal giants?
Do you have a Goliath in your life?  Is Goliath a permanent part of your existence – always around and constantly intimidating and harassing you?  With Goliath around, fear is your constant companion.   But there is ONE who can take down your giant with one little stone.  Do you know Him?  His name is Almighty!  Think and reflect on the story of David and Goliath and ask God to open your eyes.  What do you see?