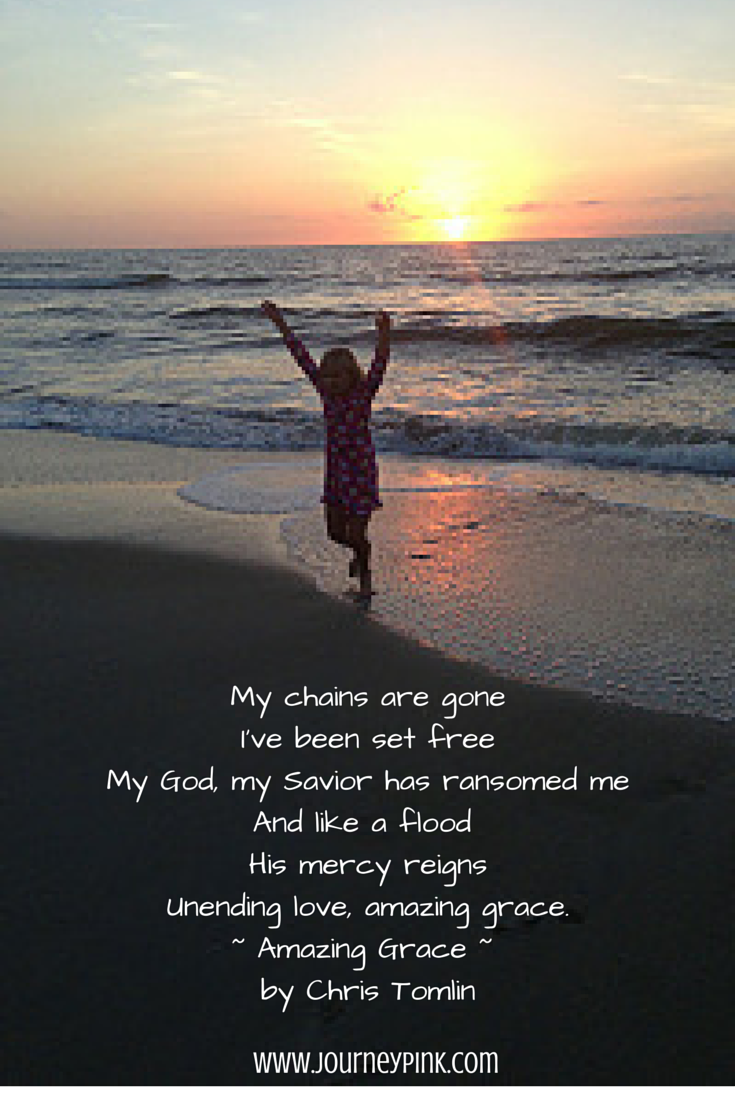 It was my turn to read aloud in our small group.  We were in Acts 12, reading the passage about Peter’s miraculous escape from Prison.  It was one of those times where you read a familiar passage, but suddenly this time your eyes are highlighting segments that make your heart pound.
The words stood out in bold print in my mind.  They connected with me, and with my heart.  He was guarded by four squads of four soldiers each – 16 people to guard one man. Peter was in prison, bound with chains.  He didn’t stand a chance.  I know a thing or two about chains, and I didn’t think I stood a chance either.
But God.

The angel of the Lord shows up and light shines into the dark cell of that prison – and the chains fell off.
The chains fell off.  Praise God!
The angel said, “Get up, get dressed and follow me.”
Peter did what the angel told him to do, and followed him right out of that prison, but he really had no idea that it was really happening; he thought he was seeing a vision.
Freedom can be surreal at times.
He followed him past the guards and to the gate, which opened by itself.  Once they walked through it and down one street, the angel left him.
That’s when it really hit Peter.  Maybe he even felt his wrists – no more chains!  He looked around and saw light everywhere.  He was free, and he knew without a doubt that the Lord had rescued him.  When it hit him…. he went.
There is movement when chains fall.  Chains keep you still, stuck in hopelessness and despair.
Without chains, you move.
Peter’s first move was to his people, the faithful people who had been praying for him.  He knocked and at first they couldn’t believe it.
We pray for miracles, and when God delivers, we doubt.  We question.
Their disbelief did not hold Peter back.
HE KEPT KNOCKING.  Peter had something to say.
When they finally opened the door, they were amazed.  He told them to be quiet and he shared with them how the Lord had brought him out of prison.  Then he told them to tell others, as he left for another place.
Freedom is a message to be shared.
Peter went, and he knocked, and he kept knocking.  He didn’t just show up and say, “I’m free” – He told them how the Lord had brought him out of prison.
It’s been almost three years since His light pierced my dark prison of childhood sexual abuse.  Just typing that sentence makes my eyes well with tears.
The prison, the darkness, and the layers and layers of lies and shame were very much like the 16 guards holding me down, daring me to open my mouth. In that darkness, it was easy for me to believe that it was just too much.  There was no way out.  It was hopeless.  So I got comfortable in my chains.  I would eat, sleep, work, and walk in them.  I worked hard to hide them from others, but they taunted me day and night.  Always.
And then, there was light.
And God said, “Little girl, Talitha Koum!” (Get up!)
Follow Me.
And here I am standing, my eyes adjusting to the light of freedom.  I am well aware that He opened every gate to get me here.  There was nothing in me or in my power to even possibly make this happen.
Knowing only His power can carry me, I am going.
With shaking hands, I am knocking.
With quivering lips that whisper hard words, I am telling.
He gave me my voice, and even if it shakes I am using it.
Freedom is a message to be shared.
Whatever prison you may find yourself in today, He has the key.  You can’t work your way out of it, you can’t climb your way out of it.  Let His light shine into the darkness, and trust Him to carry you into freedom, sweet freedom!

Remember, our Message is not about ourselves; we’re proclaiming Jesus Christ, the Master. All we are is messengers, errand runners from Jesus for you. It started when God said, “Light up the darkness!” and our lives filled up with light as we saw and understood God in the face of Christ, all bright and beautiful.  2 Corinthians 4:5-6 (MSG)

Linking up with Jennifer Dukes Lee