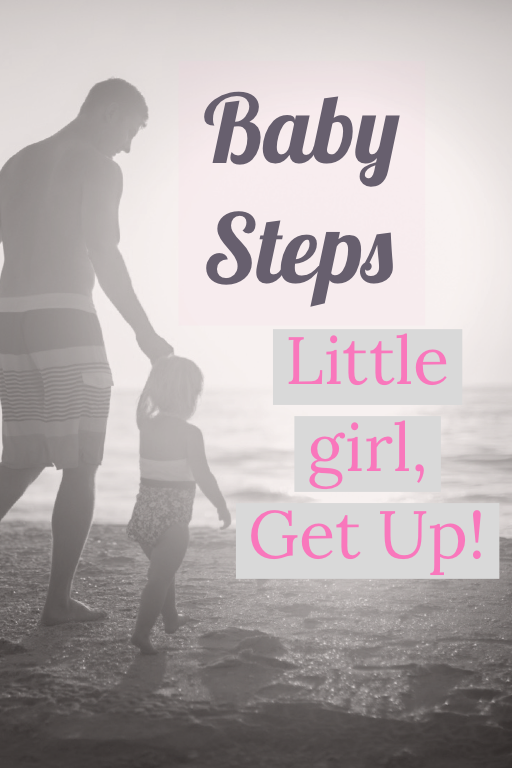 I was connecting with the little girl (LG) inside of me. I would draw and write with colored pencils. I bought coloring books with scripture and would focus on the words and staying in the lines with bright markers.  Dancing at Zumba reminded me of her and all of the years of dance.  Music would always take me back, but it really depended on the song.  Some made me smile, and others I promptly turned off.
I looked through old pictures of me, and this was the one that caught my eye.  Maybe it was the white dress or the cute hair bows. Or, perhaps it was because I had cut my bangs. Mostly it was because that little spark was still in my eyes.  You couldn’t really see it in the other pictures. 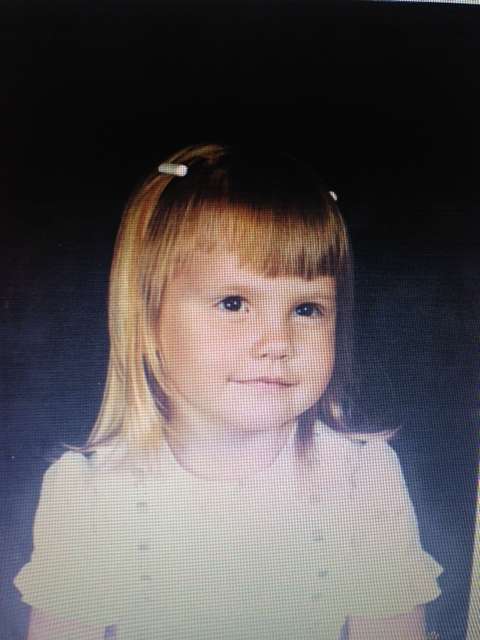 I put her picture on my desktop at work, on my phone and on my laptop. On days when I felt like giving up, I’d look at this picture and remember that I was fighting for her. At this point, it felt like she was almost out of that dark and scary closet filled secrets and shame.

I loved her, and we were connecting.

My weekend was filled with secrets.  I made a box of secrets, and I heard the word “secrets” several times.

I went to a Beth Moore conference and the topic was Sacred Secrets.  Then on Sunday, my pastor preached a sermon on the secret healings of Jesus and how some healings were private and others were public. He started with the story of the woman with the bleeding issue, and then he moved on to little girl in Mark 5:

They said she was dead. But Jesus showed up and took her by the hand and said two words “Talitha Koum!” (which means “Little girl, I say to you, get up!”)

Those words were illuminated on the page of my Bible and my heart started racing.  He continued reading as I followed along, “Immediately the girl stood up and began to walk around (she was twelve years old).”

It was as if Jesus had whispered directly to the heart of the little girl inside of me, “Talitha Koum! Little girl, I say to you, get up!” It was time.

There would be no more hiding or cowering.

LG was finally out of that dark closet and she was by my side holding my hand.

After church, my daughter and I made this picture of Talitha Koum using the confetti from the Beth Moore conference. In the future, I planned to share with her what it meant to me and explain that those two words convinced me that Jesus heals little girls, including LG. 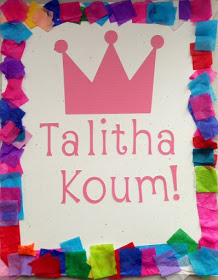 Now it felt like we were one and together we were fierce.